Ladies!! Stand Up and Refuse to Succumb Quietly

Last week just out of curiosity, I asked 10 females whom I met causally, about what they know of cervical and breast cancer?
Answers ranged from funny to strange to bizarre.
This little exercise of mine made me comprehend that it’s the ignorance and lack of knowledge about the subject which is killing more people than the disease itself! That’s the reason why world’s 1/4th cervical cancer patients are found in our country.
Now I too believe.. Ignorance killed the cat, curiosity is only framed!!
Breast and cervical cancers are those two lucky ones among the lot, where abnormal changes in them can be at least seen superficially, through naked eyes.
Let’s begin by focusing on cervical cancer first and then we will move “upwards” and talk about breast cancer in our next blog. 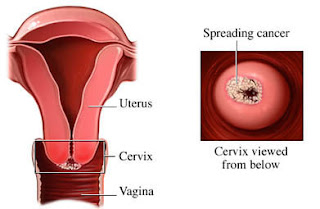 For the beginners, cervical cancer is nothing but a tumour which arises from the birth canal in the woman. Precisely, that area is the mouth of birth canal (uterus), medically known as ‘cervix’.
Luckily, it is not as common among urban woman because the rate of child bearing is relatively low. Commercial sex workers are at higher risk of getting it as they get exposed to multiple partners and may get infected of cervical cancer causing virus – HPV. Cervical cancer cases in woman from lower strata and rural India are much higher than the educated and urban class.
So, the big question is – what causes cervical cancer in a woman? The reason could be an infection from HPV (human papilloma virus) in 80% of the cases. There are several types of HPV and not all types cause cervical cancer. Some of them can cause genital warts too.
You must be wondering by now, what brings the woman at risk of getting attacked by this virus? The list goes like,
Like all other cancers, sadly cervical cancer also does not present with pronounced symptoms in its early stages. And by the time it becomes symptomatic, it reaches stage 3 and 4. At that stage the symptoms appear as,
Since this disease does not show any inkling of its arrival, so how would one ever come to know about it?
Well, not a rocket science but just one simple Pap smear test every three years after the time a female gets sexually active. And Viola!!
A Pap smear test is nothing but simply taking up a swab of cells from the area of cervix (high up in vagina) by a gynaecologist. Regular screening for cervical cancer through a Pap smear test can keep the female protected from getting cervical cancer as this test can pick the presence of smallest of the changes in the cervix due to cancerous invasion.
To keep a double check on cervical cancer and be 100% sure of staying away from it, another measure is available. That’s a vaccine!
Basically it is not a vaccine against “cervical cancer” per se´ but a vaccine against HPV, which prevents not only cervical cancer but genital warts (another STD) as well.
The best period to take this vaccine is from the age 13 to 25, for it to be most effective. When a virgin has this vaccine, it builds antibodies like all other vaccine do. And if or when there is an on slot of infection, the virus gets killed. It is recommended only until 35 years and then there is no use taking it.
Cervical vaccine comes in three shots model. 0 months – 1 month – 6 months. The cost is approximately Rs. 2000 per shot (it may vary little bit) but then it gives a lifelong immunity so it is every bit worth it!
So, a vaccine + Pap every three years = two together is almost a 100% prevention from cervical cancer. 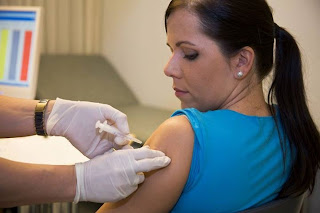 From the time infection enters the body till it becomes cervical cancer, it is a lengthy period of up to 20 years. That means God has given ample time for us to detect and treat it.
So ladies, it’s almost criminal for today’s woman to get caught by cervical cancer even with the advent of so many preventive measures. Go take one today and say aloud....
I can certainly prevent it!
P.S. Keep checking this space for our next blog on breast cancer.
at September 09, 2013 No comments: